Ground floor of No 18/19 let to Tesco while upper level has scope for further 7,000sq ft 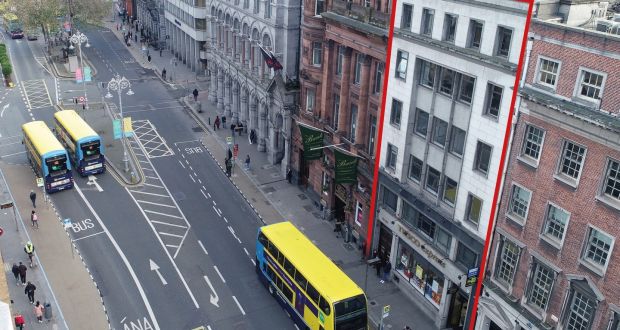 With the refurbishment of the former Central Bank nearing completion and with plans being advanced for the pedestrianisation of the area between Trinity College and South Great George’s Street, the sale of 18/19 College Green is expected to see strong interest from developers and investors.

Prospective purchasers will be interested in the building’s potential for further development. Plans drawn up by RKD Architects in advance of the sale suggest it could accommodate an extension and an additional floor. Subject to planning permission, this would increase the existing floor area of the five upper floors from 5,941sq ft (552sq m) to 16,000sq ft (1,486sq m). The upper floors, which were in office use up until recently, have separate access from College Green served by an independent staircase and a passenger lift from a secure lobby. While the building was constructed in the 1950s, it is not a protected structure.

The ground floor and basement of 18/19 College Green meanwhile extends to 4,156sq ft (386.1sq m) and currently offers secure income from Tesco Ireland Limited with a 25-year lease in place from July 2013. The passing rent is € 62,426 per annum with five-yearly CPI-linked rent reviews. Tesco have break options in June 2023 and 2028.

Patricia Ward, who is handling the sale on behalf of agent TWM, says: “We expect to see interest from private families with operational requirements, office developer landlords, serviced-office providers and individual private investors. The location is undoubted and the capital value per square foot has been exceeded by other sales in the area many times over, some on less prominent streets.”